Visit the Magic of Horses
The Academy of American Poets
by Afaa M. Weaver
Guggenheim Fellow

I was a worker poet for fifteen years, from 1970-1985, as the Golden Age of Capitalism segued into the loss of the country's old industrial base, and the transformation of American inner cities into a marketplace for the illegal drug trade. When Freddie was killed, Baltimore bled, and I was heartbroken. For the first time in my life, I felt the strings that connect me to the city  where I was born, a city that is much different now from the Baltimore I remember.

"Incident" by Countee Cullen is a poem that sends an awkward mix of embarrassment and annoyance through me each time I read it. It's an accurate poem, one that ties to a specific memory of mine. I worked at Procter & Gamble in South Baltimore for most of those fifteen years. The plant is located on the harbor's edge, within walking distance of Ft. McHenry, where southern sympathizing members of Baltimore's city government were detrained during the Civil War. In the years leading to the Civil War, Baltimore's notoriously violent political gangs earned the city its nickname, Mobtown.

I was driving to work one day when I encountered a little white boy with the temperament of the child in Cullen's poem. I was making the left turn from Fort Avenue to head to the warehouse, when the child shouted out to me, "Hey, nigger." Of course, I didn't stop. He was a child, and I had been a child in Baltimore. As with many people, my childhood was a mixture of good and bad memories. With any conscience and some fortuitous circumstance, maybe that child is now a man who is ashamed of what he did that day. I had my mischievous moments as a child, although I never shouted racial obscenities at whites on their way to work in my neighborhood. There were few jobs for them where I lived. More importantly, my manner was that of defending myself against white people as opposed to attacking them, verbally or otherwise. America's history of anti-black racism and oppression is rooted in slavery, where black uppityness can cost you your life.

The Good, the Bad, the Ugly
"The Little Rock 9"

As I watched the news from Baltimore in the wake of Freddie Gray's death, I worried for my family's safety, and I ached to see places I knew well overcome with an air of violence. Technology affords more of a firsthand view of things. I followed some of them events through the Periscope app on my cellphone, and once of the people I followed was a reporter for the Guardian who had a good deal of integrity. However, it was Geraldo Rivera whom I heard making light of the whole situation, with bad humor tinged with contemptuousness. It was hurtful, and I was surprised to find myself wearing my native city inside my heart in a way I've never experience. It's not unlike what many African Americans feel when we assemble our own sense of love for our native land, despite the messages that want to say we are not wanted here where we are born. What's even more hurtful for some of us is when those messages once in a while come from inside the ranks of recent black immigrants to the U.S. to raise the complex questions of who African Americans are and who we/they are becoming. 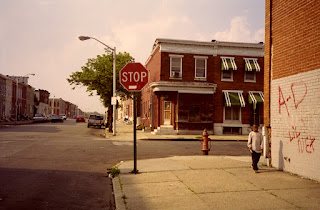 The Good Times Were Good
"Scrapple"

Growing up in the 1950s' with Baltimore's southern style of segregation, it was also the time of the Golden Age of Capitalism, the post WWII Boom that gave people like my parents access to a piece of the American Dream. It was also the last phase of the Great Migration.

My parents managed to buy a home, several cars, and to send five children off to college. We all have college degrees, although our parents did not finish high school. The youngest of us grew into an integrated world, where they with and formed friendships with whites in social rituals that were not a part of our parents' memories of being young in southern Virginia and North Carolina--in the flow of the Great Migration. The Baltimore I remember was one where black folk were mostly from Virginia, the Carolinas, and Georgia. There were no neighborhoods of Jamaicans, Haitians, and Africans as there are now. Much of that old black populace worked their way out into the suburbs of Baltimore. Riding through East Baltimore now, there are rows and rows of empty row houses.

But I remember the laughter of living in a community where layers and intersections of shared origins and histories brought us together, as well as the harsh laws of separatism and disenfranchisement. I was taught to make the best of it, and not to accept limitations. have done it as best I can, and not always with the more thorough confidence of a healthier ego. Nonetheless, I was made to understand what it means to fight the good fight. So I wept when I saw my hometown in turmoil, and I wept for everyone, black, white, Hispanic, Asian... It was calving season in Wyoming, the young Angus calves galloping over the small hills behind the writer's cottage at Jentel.

I was a senior at Baltimore Polytechnic Institute when Dr. King was killed. My mother cried like a baby, as the saying goes. She stood at the wall mounted telephone and wept while talking to one of her sisters. We all breathed more easily when my father came home from the steel mill. The military came into the neighborhood. We were under siege, and in fact, that was my sense of things in the 1960's, the time of my adolescence, and it worsened in the 1970's with police helicopters and searchlights, as the jobs that gave my parents a chance began to dwindle away, and illegal drugs flooded our world. Still I remember the picnics, the family gatherings, the sounds of the baseball game from Memorial Stadium, as my father listened to his radio while relaxing after work. The tiny row home in which we lived seemed so big. Our world seemed so big.

The sense of my hometown forms my lens and sensibility of the American city in Spirit Boxing, and I want to write more poetry about that collective awareness that seems to have parked itself in my imagination here where I now live, in Connecticut's countryside. 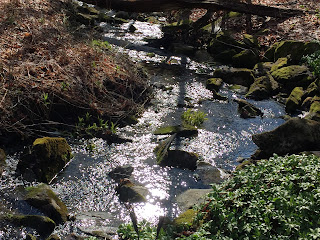 Three blessings have come my way this year, all of them pointing me to my work with a renewed sense of hopefulness as a poet. The three are Spirit Boxing, the placement of my portrait in the new Smithsonian Museum of African American History and Culture, and a Guggenheim fellowship.

So I'm writing, Dear Reader, to celebrate the gift of being a poet, the gift of gratitude for my lineage. In the Smithsonian, my portrait sits right next to that of Langston Hughes, whose secretary, George Houston Bass, mentored me in the deeper meanings of that lineage during my studies at Brown University. My tradition and influences surround me in the panel. Lucille Clifton helped ground me in my intuitiveness, and my deeper sensitivity in my twenties.

Out in Wyoming, I wept for the city where I was born. The tears dried and bound the braids of my inheritance so that it cannot be taken away. "Immortal City, Immortal Heart" is a working title for what I plan to pursue with my Guggenheim, the celebration of a complicated love and loyalty to this often strange but beautiful place where I was born, a place in the heart.

Follow me and Kristen Lee Skedgell at Magic Horses...