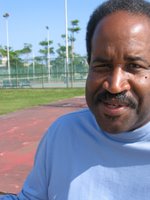 Where is all this negativity

I wonder who's wandering...

The New York Daily News became a bit of an obsession for me this summer. I was looking to make another step toward getting connected again after spending a good bit of time studying Chinese in Taiwan and traveling in China a bit the year before. The convenience store across the street, one owned and operated by an Egyptian friend, always has the New York Daily News. So there I was again this past Thursday August 24th, buying the newspaper that makes it its business to grab your attention. Brother Crouch was defending Juan Williams new book, Enough, which, according to Crouch, has put Williams squarely in the clash between the black middle class who wants to "blame the victim" and the poorer, more urban class of African-Americans who are getting so much projection it seems the ancestors will have to call for backup to keep them from becoming opaque under all the weight.

My interest here comes prior to reading Williams book, and I put that up front here so I can go to where Crouch's column took me today as I mulled over his words. It is a rainy Sunday here in the Boston area, and I took the Red Line subway to Central Square, Cambridge, to work out at the YMCA. Central Square is a place where cultures meet. As this part of the world has one of the most international black communities I have ever lived in- aside from East Orange, New Jersey- the kids you see in Central Square will likely go home to parents and grandparents from different parts of Africa and the Caribbean. The Jamaican and Haitian portions of the black community in the Boston area are the largest, and pre-Civil war black families are a distinct minority.

So when I got on the train in Somerville and headed for Central Square, two black kids got on, two obviously adorable kids who were trying to be cool. They had on the hiphop attire, which, for all its bagginess, was very new-looking and neatly done. I remember that old song from my Paleolithic generation that went something like "I'm in with the in crowd..." When I was a teenager back during the time of dinsoaurs, it was cool to be cool, but cool kids often were on a "too" fast track. So immediately I thought of that as I watched them and watched the other passengers watch these children, who were obviously children to me.

It is important to note here that I live in a place where when I take a walk in my neighborhood I sometimes scare white people. They may or may not be neighbors, but just the other day I was on my way to Dunkin Donuts to sit and read the collected works of my one of my favorite poets, who just happens to be a major part of this lecture I am writing on poetic influence and the modern/postmodern speed bump that occurs in African-American and American poetry. A white man turned the corner and froze. I mean he stopped in his tracks for a few seconds. Well, do you think he might have put the possibility of me working on a lecture in his range of perceptions that took place in a matter of seconds? Probably not. He just saw a big black man, and the non-black passengers on the train looking at the children? I have no idea. Today I did not want to think about that. I just wanted these kids on the train to know my smile was a loving smile.

Maybe I should move? Oh well, that takes money and...

In Central Square I got off the train and walked upstairs to see several groups of black kids. In front of me a few boys were discussing how some of their friends were now robbing people, and these boys all looked like children to me. Their conversation was not unlike the conversation I had with friends when I was their age, although it was more likely to be who was able to fool the guy at the Cut-Rate liquor store about his age and therefore buy liquor and wine. Things did get bad as a few of my friends did not survive, and others are serving long terms in prison for things that will get you long terms in prison. I wondered as I headed to the red light whether these boys thought I might be 5-0 with my cotton shirt and pants, my tote bag with sneakers and seat outfit.

My friend the poet Sam Cornish once told me- in his splendid candor, that I dress like a policeman. Sam is from Baltimore, too, but from the West Side and sixteen years older, in the generation ahead of me. Sam is the quiet voice of the Black Arts Movement. He once scolded me for being disrespectful; I was joking but still disrespectful. "Mike, I'm old enough to be your father. You shouldn't talk to me that way."

"Okay Sam, sorry I cussed, but you pissed me off."

It's our black men's code of civility.

Sam really sees me. How often are we seen as people of African descent in this country? Ah, an old and tired question. I know. What's new?

Our children are new, and the postcolonial question of what we mean by the first person pronoun "we" is new. These children are new as children always are, and some of our ways of talking about things that are just social processes that have always been there are perhaps old. What new ways are there? I hope there is one other than casting blame. Acceptance of some realities would be good. As much as their clothing makes these youngsters look like the sand people in Star Wars, it is what they want to do, in the same way my group wanted to wear our shirts with the tails out and flapping, an utter disgrace to our working class elders who wanted us to become middle class. It seems many of us have.

One last suggestion...maybe our conversations can be about how we are all victims of a materialist machine that has spun itself into madness. If we want these children of ours to "act right" maybe we should define that for ourselves...those of us who think our behavior is on the up and up.

More about me in case you are wondering:

Doug Holder said…
Don't Move Afaa you are the poet/laureate of Somerville!
8:39 AM

Thanks so much for this exploration. Coming from the middle class of DC of the seventies and eighties, I found myself just as disgusted with our corrupted spirits as my family and neighbors felt with the disrespect of the Blacks who didn't live up to their expectations. I am glad to have my concerns with both groups lack of introspection but especially those who were priveleged.
9:31 AM

oyawriter said…
Thanks so much for this exploration. Coming from the middle class of DC of the seventies and eighties, I found myself just as disgusted with our corrupted spirits as my family and neighbors felt with the disrespect of the Blacks who didn't live up to their expectations. I am glad you have given such kind words to my concerns about both groups lack of introspection but especially those who were priveleged.
9:38 AM

irene said…
often i have found myself in a position of fear, when it comes to our young people. maybe it is my age or maybe it is my distrust. what i try to do is to use my eyes instead of my fear. if i can perceive and recognise their youth as simply being a time of exploration and experimentation then i can calm myself and smile because then i can remember what a hot shot i thought i was at their age. infact i still think of my self as 'nifty?'
4:20 PM

January said…
I know that feeling well of breaking the silence just by entering a room. There are so few people of color in Eastern Mass that I can't help but stand out.
8:14 PM

very good to hear you thinking out loud in cyberspace about such matters. i do know what you and january mean. want to come visit me at my partner's apartment in *western* massachusetts?? : )