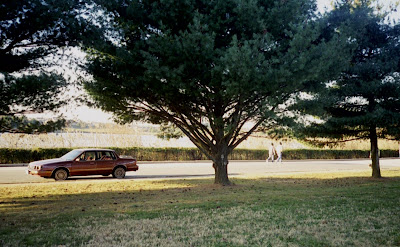 In Secaucus, I look carefully over the rims of entrance and exit ramps, none of which seem to lead anywhere, as each turn seems to hold the promise of some monster from the blog. The whiz of things seems to sting the air, make it an uninhabitable place where you cannot breathe. It is part of the mythology of New Jersey, that the only part of the state is that visible from the turnpike, the capitol of which is the layering of upright pipes that line the landscape like muted priests, solemn and overwrought with knowledge of the earth. In Secaucus, I get a severe test of my ability to drive, to take to the curves and feel the car’s center of gravity roll into the grave of the curve so that I know when to apply the brakes and how to keep my focus on the present moment of things, that steady American meditation of driving, knowing the car and the road as the only thing happening when there are countless stories around you, unfolding in bewildering exponential ways between sets of ears of folks behind the wheel.


Curves are teachers, and I got my most frightening lessons driving in the county roads in Virginia, place where my parents were born and where I spent summers as a child in the same way as many black folk did, and many other Americans as migration is an American thing. We are a country of people who move. In those curves I learned to respect gravity.


They were steep, so steep you wondered whether the civil engineering was left to the devices of people who had no such schooling. The car would almost tilt, and you had to slow down enough to get through and not lose control and become one of the mythological accidents that got recounted in those old wooden farmhouses people like my grandparents lived in, wooden houses that were an accumulation of additions to a central unit and which sat on pillars of rocks that left spaces underneath where the cats slept. If you feel into a curve and did not emerge except in an ambulance headed to the morgue, then you also became a part of the silence like the still wind in the grass on the edge of cotton, corn, and tobacco fields, or the silence of pines.


There were the flat stretches, too, flat stretches like the stretches of the turnpike just outside of Manhattan and heading down into New Brunswick. The speed limit is something people don’t think of in flat stretches. You think only of speed, speed when you are young and have so much time, and speed when you are older and rushing to get to or away from something. In Virginia, there was the whooshing sound of going past the trees, long stretches with no houses and no one to see us pushing the speedometer as far as it would go. We pushed until we could hear the pistons begin to go shrill, beating them senseless to keep up the demands on them made by the engine. The engine is a thing that has its own mind, and the mind demands a performance from each and every part, and it demands its sustenance, the gasoline that smelled like an aphrodisiac to us when we were young.


We were so young we had no license. No license was needed in the farmlands, only guts, a certain set of guts.


Drag racing was dangerous there, and it was even more dangerous in Baltimore, a southern city that gets dimmed by the northern capitol just below it. In Baltimore in the sixties, there were cars that had the sound of thunder, and I kept a certain love for it punctuated by Robert Mitchum’s Thunder Road, a film about bootlegging and outrunning the state police. These cars that had the sound of thunder also had tires we called Cheetah slicks, large radius tires with very thin rubber bodies. They were made for the tracks. I was young when an uncle of mine and his drag racing buddies lined their cars up on a side street in East Baltimore, the engines breathing like big cats after a long run on the plain.


I raced in a car not fit for racing, my father’s Chevrolet Bel-Air, the ’62 model, a four door sedan. One night out with friends in another car we took it up to 90 miles per hour. I was looking over at the other car, laughing along with my friend when both of us saw a red light at the bottom of the hill with cars sitting and waiting. We had passengers in each car, and to avert a crash I drove onto the shoulder and slid the car through the light and halfway down to the next light, leaving a quarter mile stretch of tire marks and busting a rod on the engine. The engine called for power its innards could not muster. My father was crestfallen, and only now do I know the full weight in his eyes. All I knew was that I was a good driver, certified as such by my companions.


There were stories like this happening all over the country, but in Baltimore I call it part of growing up southern. On the trips down to Virginia in the summer, my mother threw her arm around my father as he drove. First we had a ’54 Ford, a Sherman tank of a car, and then they bought the Bel-Air. My father came home with an Impala that was a year old, but my mother told him to take it back and get the Bel-Air. She had the idea that it was a better way to go home. My mother was a proud woman, as was my father, but her pride settled matters that needed settling within the home.


Driving to Baltimore two weeks ago, I stopped in a rest stop just over the state line. Inside I saw black folk who seemed to move slower than black folks I saw at the stops in New Jersey. There was jazz playing, and the white people looked more like the whites I know from growing up, people who know poverty and who come into Baltimore from West Virginia. These are people I worked with for many years in Baltimore.


There was a section of travel brochures for Maryland and for Baltimore, all of them around the theme of the Civil War. The one for Baltimore explains that it was a divided city during the war. The Union forces came in and arrested the entire city government at one point, and Ft. McHenry was used as a prison for some 1500 southern sympathizers from the city during the war. I sat in my car, a Ford Edge I rented for my vacation, and read the brochures and chuckled to myself.


Home is down home. Home is in a southern way in my mind.