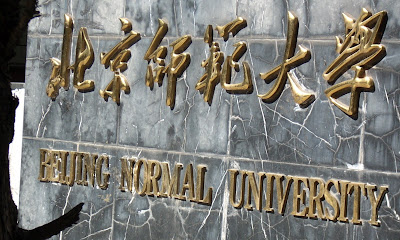 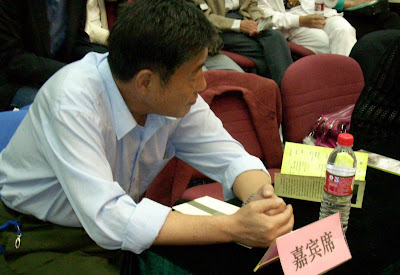 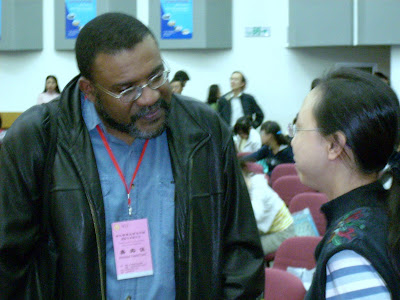 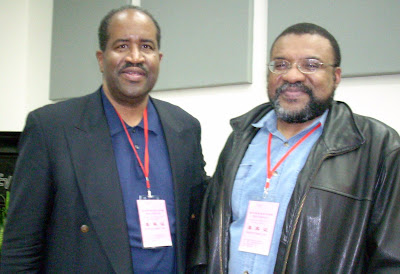 食指
The Hand of the Poet

It is early Thursday night. The first day of the conference has gone nicely, and I am walking along in Beijing with Kwame Dawes. We ease along as we do when we talk, little by little, a slow motion kind of ambling that is as much southern and Caribbean as anything else. The shops are mostly closed, although the night is young. I have been here before, but it is Kwame’s first time, and for him it has personal significance. His father came here in a delegation from Ghana long before the opening of China. In presenting his paper, “Babylon by Bus,” he spoke of his father.


We get to an upraised section of the next sidewalk and two people are approaching. It is 食指 Shi Zhi, the poet, and his wife. We poets have just had a wonderful festival reading that included poets from the Beijing area. Shi Zhi is a very special poet, a living monument for the contemporary Chinese lyric. In the sixties he wrote lyric poetry when it was not appropriate to do so by government regulations. He was detained for many years, and for a good deal of that time he was detained in a psychiatric center. I met him when I was here three years ago. Now he is being celebrated.


We pass on the sidewalk, and I greet him in Chinese as he has no English. I nod and wish he and his wife a good night with beautiful dreams. He smiles widely and deeply. Then they move on as before, an older couple, he older than she but both of them in some kind of synchronicity with everything, the bold harmonic of stillness, the moon filling with silence, the soft foot sounds of the very few of us out here in the night.


After his reading, I took time to tell Shi Zhi how much I like his work and how moved I am by his story. I say how special he is, and he understands. I tried very hard not to let tears roll while he was reading, but it was no use. He touched deep personal chords inside me.


This is the World Literature Today (WLT) Conference at Beijing Normal University, a cooperative project between Beijing Normal and the University of Oklahoma, the home of World Literature Today and Oklahoma U's Institute for US-China Issues . The WLT conference awarded the very first Newman Prize for Chinese Literature to Mo Yen for his accomplishments in the Chinese literary world. This WLT is historic in many ways. The Newman Prize is the first such prize offered by a US-based organization.


I gave a paper entitled “To Write a Poem in Chinese and Bid It Sing/the Translatable Spaces of Creativity,” wherein I explored the changing dynamics of identity as one moves through languages and cultures. The moderators were high-ranking academics from Beijing’s academic community. I received a good grade, as they examined my every word and said they appreciate my interest in the culture. I was nervous and sweated through my shirt’s long sleeves. Afterward I went to the next panel, a discussion involving poets from China, several of whom I know through my work with them at Simmons College’s International Chinese Poetry Festival, which convened last weekend.


Later, Kwame and I moved along in the night, talking about language, change, and the lives we live as black men…in a city where the legendary bicycle paths are now roadways full of traffic.