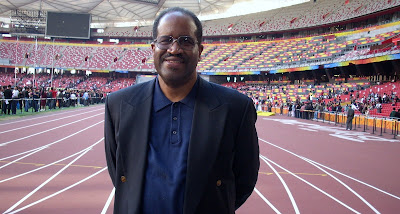 First Place for Stillness
The starter's gun went off, and there we were, battling to see who could stand still in the deepest way.  My competitors could not resist moving, so there I was.  I took the gold for being motionless.  I would not have won this race for standing still, for being in the moment there on the track in Beijing's Olympic Bird's Nest, had it not been for the Fulbright.  Unlike some other awards, it's the one that keeps giving.
It was 2002.  I had been named a Fulbright scholar at National Taiwan University.  A bit confused about the layout of the city, I did what a man raised in cities will do.  I sat on the curb there in Taipei just outside my apartment building and studied the neighborhhood, listened to the sounds of the cows across the street in the university's agricultural school, watched the taxi drivers drinking and hanging out, smelled the new smells, all in a place on the other side of the world from home.
My Chinese was minimal at the time.  In 1984, I enrolled in a weekend class in Baltimore.  It was the Chinese Community Association under Dr. Lillian Kim, who has since passed away.  The classes were taught by a professional musician who was born in Taiwan.   She had a musician's lack of patience for sound mistakes.  So she drilled us, but it was only six months, and in the spring of 1985, I had to leave the classes.
So there I was sitting in a place where sounds were familiar, but where I could not make any sense of things.  It was as if I had broken the "sound echoing sense" idea of poetry from English metrics.  I was in my own dream of the sound.  Walking along in Taiwan I was suspended between realities, in a place where the usual promptings did not work.  It was a good space, a space where you could look out onto the way people perceive you.   Of course, that is if you have that kind of traveler's instinct in you, the instinct for stepping outside yourself to explore another way to be.
Identity is a set of clothing that seems to grow out of your skin, but if you are fortunate you get to a place where you can consider that maybe it is a set of clothing that you put onto your skin. It's then that you wonder how you ever came think it was innate to your being.
Maybe it's the idea of fluidity, as being black is not something I want to give up.  Rather it's something which I refuse to let interfere with my need to see the world, to experience the world.  For me that means choosing my response to some situations, to being less sensitive to situations that have formed negatively in my own history, the history of me.
I had a friend who once said that when he went to Africa his life made sense to him.  Well for me, it was going to Taiwan and China.   I was not looking for a sameness in outward appearance, but in what I had held to be true in spirituality.  Of course, the western fascination with foreign ideas of spirituality always has a sobering moment when we travel to the places where these spiritual systems were born, and there is the danger of what Deepak Chopra calls spiritual materialism.  However, I have found affirmation of the idea that there is one truth--goodness.  For me, that goodness has a light.  It is a light I often find when I am sitting down resting my nerves, as my mama used to say.
We should rest our nerves sometimes, rest them in a new place.  Then we will see everyone has the same nerves, these things that live on the inside of us...away from competitions.
When I got back to the Boston, I started studying formally, and I have managed to get to the intermediate level.   My next step is to get into the fluidity--there's that word again--of the vernacular and of idioms so my communication is clearer and more responsive.  As it is, I get into places in a conversation where the other person's personality and instinctive ways with the language lose me and I have to resort to contextualizing.  That's when I lose bits and pieces of meaning.  But maybe that place is where I also lose the bits and pieces of clinging to the old clothing of identity.
It began with the Fulbright.   Studying Chinese formally and working with Chinese poets as a project was an idea that came to me from my Fulbright experience.   It seems as if I can reap the benefits of that experience for a long time, provided I remember the value of stillness.