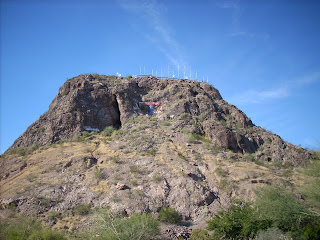 Tempe is a landscape as far away from Somerville, Massachusetts, as Saturn is from Mars, the spacious desert vs. the rocky hills and ocean, the cacti that take centuries to grow vs. the layers of fall New England foliage.  Each arm of the cactus is some major accomplishment that goes unnoticed by most eyes.  Then there are the stunning moments, such as when a desert owl drops into a downward glide from the inner portion of the top of a tree, one moment an unseen hooting in the evening, and then the noiseless swish of some of the most perfectly placed feathers in the world of the birds, a favorite world of mine.

Meeting Norman Dubie was as much a mecca for me as seeing Twin Buttes, a pair of hills that are sacred Indian ground and which sit next to a very old cemetery, both of which are behind the Fiesta hotel, where I spent a week while in Arizona visiting friends and relaxing.  When I met Norman for the first time after knowing of him for thirty years, he explained the significance of this part of this sacred ground.  We were in the home of my friends the poet Cynthia Hogue and her husband Sylvain, who arranged a reception for me.

“There is a cave there that only a few people have been able to find,” Norman said.  Of course, I went looking the very next day, but I did not find it.

Poets go into these spaces as much as we go into the unwritten poem, that minute and all too infrequent space between thought and the absence of thought, the timeless now, the space of creativity.

We talked for almost an hour, this poet a few years older than me, his beard a gorgeous, pearly white, his demeanor one of persistent kindness.

Chris Burawa, poet and translator, told me about the hills before I met Norman Dubie,  So I had been leaving my room in the mornings after my daily bowl of oatmeal and headed out across the parking lot, one of the very few walkers in that part of the world.  In Arizona it seems only the poor and the searchers are walkers, so parts of me qualified for each, as it seemed most people intent on exercise did things indoors.  But I wanted to see these hills from every angle.  After awhile, my gaze made them human, and then I heard the solitary weeping of sacred things wound round and round with highways and litter.

They are as solitary as the mountain lions who climb to the tops of cement fences in backyards, looking as much like lions as one would want an animal to look that close to the living room.  They come looking for food, or they come out of some natural longing to walk about in the world, to be on the move.

Searchers we may very well be. If we look at the time in which we have been searching, the time since some fifty of us walked out of Africa thousands of years ago to populate the planet with all its cultures and the ways we have come to name ourselves, we can revisit the idea of what ground is sacred.  If we think also of the fact that humans are the only group whose disappearance would not obliterate the chain of living things, the idea of what is sacred perhaps belongs in a truly special place.  If insects were to disappear, all other forms of life, the whole web of things, would disappear.  So it seems to me that these grounds on which we come to live and grow are markers of accomplishment like the difficult appendages of the cactus.

As someone who grew up with westerns, the legends of the Old West seem much like the cactus, often prickly things that grew in adverse circumstances.  Billy the Kid was just sixteen years old in Arizona, an emotionally disturbed teenager who was struggling with abandonment issues and living in an America where traumatized veterans from the Civil War roamed the country, many of them armed and prone to violence and all of them quite a bit older than he.

There is that history and there are these mesas of tranquility, such as the Sunday morning group meditation in the Zen center where I went at Chris’ invitation.  After sitting and then chatting for two hours, we stood out in the yard and had dessert, juice, and tea.

Arizona is this kind of place, where sages grow alongside those old legends, where poets with devotion to reverence for life intently walk The Path, word and spirit.  It is this and it is memories and promises, changing circumstances in the heart much like the shifting shadows of the sun over the Twin Buttes, two sacred Indian hills in Tempe.

I will have to go back to Twin Buttes to find that cave which Norman told me about, to go searching again.

Meanwhile, here is the link to an interview with Norman Dubie from