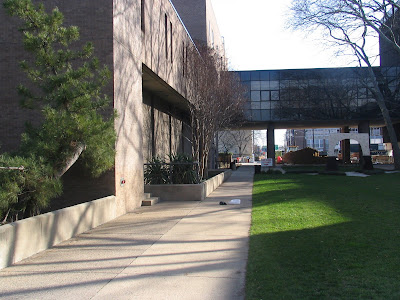 The Angel of Adjunct Awareness

It was in autumn, in the year nineteen eighty-seven, a few months after I walked across the stage and away from graduate school life, away from the pious heaven of access to some of academe’s best libraries, the heady and inspiring culture of what was, at that time, the most popular undergraduate culture in the country and one of the most popular and competitive writing programs. I didn’t think much about what life would be like outside the campus green, despite the fifteen years of factory work. It was a grand performance in willful forgetting, I suppose, as I even tried to finagle a way to stay at Brown University in the way of a doctorate program, but I waited too late for such a thing and so was cast out onto the outer planets away from the center of the universe. I sat at a lunch table at Essex County Community College in Newark, N.J., munching a homemade turkey sandwich with lettuce but no tomatoes as I could not stand a soggy sandwich in those days of struggle. It must have been the unhappy munching face I made, but whatever the signal I was soon in the presence of The Angel of Adjunct Awareness.

He was a poet. He is a poet. Even today he descends at the most propitious moments to show me he is still prescient.

In his unassuming way, he got quickly to the business of a poet not having much to do in the way of work and needing money to pay bills.

“Do you want to know how to get work in the city?”

Of course, the city was New York City. It was a vision of heaven, bigger name universities, standing before the unwashed masses of students and expounding on some really interesting subject. It was the prospect of getting out of the textbooks for composition and into content courses.

“You look like you could use some help,” he said.

He began to outline the process, telling how to arrange my vita and what times were best to approach department heads looking for work. I was excited and came home to tell my wife there was a chance to break into the metropolis, although we had no chance of moving. I would have to take the NJ Transit train from East Orange to the PATH train. In those days the PATH went into the World Trade Center. It was still the late eighties, before the first bombing of the building.

I had luck right away. In my first attempt, I landed work at Borough of Manhattan Community College, which was still composition but in a new environment, and I thought I had reached the first level of nirvana when I got two courses at NYU. One was the undergraduate course in African American Drama, and the other was an undergraduate Creative Writing course. Mark Rudman and I taught the undergrad poetry workshops under Sharon Olds. I thought I had arrived, but times were still tough. There were challenges that tried a poet’s courage, such as being in the city at night with a token and some very spare and sparse change.

However, it was magical at times, too. My wife at the time, Aissatou Mijiza-Weaver, found work at the Ukrainian high school near St. Mark’s Place, and when we our schedules allowed, we often walked to dinner at one of the Indian restaurants between 2nd and 3rd Avenue. We were young enough, in our late thirties, for it to seem like something of an adventure. She is a painter, sculptor, and art critic, and we spent a lot of time in the world of visual artists. She also worked at the Strand bookstore, which counted among its other prestigious employees none other than the poet Tom Weatherly. The neighborhood’s magic was deepened by the presence of University books, a unique place on the 8th floor of 10th Street, or thereabouts. My memory is a little fuzzy on the address. That store consisted of rare and precious books scattered around with the owner sitting in the midst of everything in his peculiar chair. Prominent scholars from all over made the mecca to this odd place to find books only he had. Now it is gone.

My students were mostly wonderful. The classroom became a place where I could both test myself and feel as if I was making a real contribution, and I usually I loved being with my students. At NYU I conceived and taught the first graduate course in black poetry ever offered at the university. Some of my students later ran the St. Mark’s Poetry Project for awhile. In Newark I managed to become the writing consultant for Seton Hall law school, and in the summers that job became the director of the writing division for a summer program for people aspiring to enter law school in the fall. They were eager students, many of them near my age, and I was moved many times by the hunger they had for a law degree.

Teaching had its challenges, for sure, and there was always the challenge of trying to figure the space between my working class experience and whatever this space was that consisted of riding the NY subways for much of the day. I often felt out of place and inadequate. I could still hear the whir of machines and trucks as if they were next to me there as I rode the #2 subway line to Flatbush Avenue in Brooklyn. For a few semesters I taught composition at Brooklyn College, and the adjunct office was across the hall from the office of Allen Ginsberg and John Ashberry. I never saw them, but each time I glanced over at the door I had a long way to go, despite the fame I accrued in Baltimore as some kind of working class hero poet. I was in the bigger, wider world now, and making less than I made in the factory and with none of the benefits. The lack of health insurance especially bothered me.

However, there I was in the Big Apple, and my tenure track position at Rutgers was only two years away. That would come when another friend brought the job opening to my attention. Robert Philipson was doing a post-doc at NYU in African literature, and he pointed out the Rutgers opening to me. I applied and was hired with the support of Henry Louis Gates. Yes, there were other angels, including Gwendolyn Brooks and Rita Dove. However, my professorial beginnings in the New York area were made tangible by this other very kind and generous poet, the Angel of Adjunct Awareness.

It was The Angel of Adjunct Awareness who brought me closer to landing more firmly in the world of poets who are professors, as firm a thing as that will ever be. The creative mind is not one with the critical and should never be, but all good glory goes to the poet who wants to know things, the happy generalist.

Tis Barry Seiler, a kind and patient observer of the universe who lives a contemplative life at high altitudes and to whom I am forever grateful.