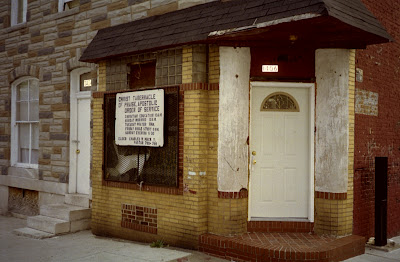 This was once the corner store across from
Fort Worthington Elementary School
East Baltimore
circa 1957
I loved arithmetic so much that when the teacher announced it in the 4th grade I hollered out "Yippee!" Call me the king of nerds. My classmates helped me understand that it was inappropriate expression in the context of their ideas of classroom decorum. Mrs. Miller was our teacher, and she thought it was rather cute of me to express my enthusiasm for math class. She was a stern woman, and I only remember her as being tall and beautiful, a dark brown-skinned woman with a stately demeanor. She was a little mean, too. Many a knuckle got cracked with that wooden ruler she kept ready on her desk.
Mrs. Miller was taken away unexpectedly, murdered by a man. I don't remember if it was her husband or boyfriend. I've always thought it was her boyfriend. Maybe so.
With the exception of Mrs. Tang, a longterm substitute, all of our teachers were black. I remember Mrs. Tang because her name was like the breakfast drink the astronauts took with them into outer space, the outer space beyond the concentric circles on the wall chart showing how far the Cuban missiles could reach. But that was after Mrs. Tang. The missiles came in the 6th grade. Mrs. Lewis was our teacher. She was a woman who seemed to be the embodiment of jazz. She had a way of easing around the class that reminds me now of the sound of vibraphones from Milt Jackson.
Mrs. Lewis told us to write something about our lives one day. I came in with twelve pages in longhand. What else but longhand? We didn't get a typewriter until I got to junior high school. I write "we," but I don't remember allowing my little sisters to play with it. All they could do was play. They were only nine and five respectively. No way they were going to mess up my typewriter.
Although she was impressed, when I brought my twelve pages to class, Mrs. Lewis said, "Michael, I didn't tell you to write all of this."
I had a lot to say.
There was a Mr. Lewis, too. He was a corpulent man who dressed as nicely as the ladies did, a semi-formal presentation. We were playing in the schoolyard one day, duck duck goose, I believe, and I remember Mr. Lewis's bald head shining in the sun. It was amazing, a clean, smooth black mirror under the sun. The sun, of course, was in outer space, the safety zone above the reach of the Cuban missiles.
Mrs. Lewis and Mr. Lewis were not related.
The principal was a white man with what must have been some severe kind of arthritis. His fingers curled a bit. He was a kind man with a name something like Mr. Galeprin. I don't remember the spelling.
My parents went to the office one day to discuss me with Mr. Galeprin. I was terrified. I couldn't imagine what a perfect nerd like me could have done wrong. They came home and gave me the news. I was going to skip the eighth grade. There was no vote taken. It was a parental edict, and so I tried to imagine skipping non-stop for two years. What kind of sneakers would I wear? That was the sillier part of me. I knew I would be working like a nuclear power plant for the rest of my life, and I would always be with older kids.
It was a predominantly white school, and so I left the black world of elementary school life and took the bus to the larger space that, unlike outer space, did not seem nearly as safe as the concentric circles emanating from the black center of my black world.
We were children. We did what children should do. We obeyed.

Unknown said…
Nice memories. Are you working on a book-length memoir of this period in your life?
8:52 AM