That Summer in New Hampshire 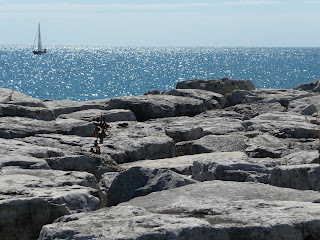 When my ship comes in is a phrase we all know, or a certain generation knows, and it's about the thing hoped for but not quite seen.  The poet's success is some ship out in the bay for many of us, and maybe it's when we realize it's better for the ship to stay out on the water that we come to understand the real prize of this thing called being a poet.

I left Baltimore and drove up to Indian Pond, New Hampshire, without a clue as to how long it would take.  I had been on the road for eight hours and realized it would be a few more before I got to the turn I was supposed to take to get to Catrina's house.  There was supposedly a mailbox there at the road just past the junction where New Hampshire met Vermont, but it was dark.  There were no lights on the road, just the road itself and the way it revealed it's curves and dips to my Datsun 510.

Recently, I had to explain to my students just what a Datsun was.  "It was what Nissan was before it became Nissan," I told them.  "Oh really," they said, "Professor Weaver, you are old."

But there I was in the dark with my five speed hatchback.  I had most of what I owned in and on it, including my Schwinn High Sierra bicycle.  My buddy Duck, a man I worked with in the warehouse for years had explained to me that a bike was the emblem of freedom, that and staying out of debt.  Before I left the warehouse he gave me the precepts of a black man's wisdom.  "Keep your bike, Mike.  Pay your bills, and guard your affections.  You know how easy you are to fall in love."

That last precept took a few years to sink in, and when I finally saw that mailbox I took the turn onto the dirt road leading up a steep hill.  There were no lights anywhere, but I could make out the grove of trees Catrina had drawn on the map she mailed to me with a letter explaining my station as her artist helper for the summer.  I went just past the grove and took a right turn, and it wase the right turn.  When I eased onto her grass just outside the kitchen door near her well, she threw open the door and stood there as vampish as she could for all of her maturity.  She was eighty-three years old, the daughter of a wealthy industrialist who had known the entire Calder family of American sculptors as well as Madam Soon Qing Ling, one of the last female aristocrats of Old China.

"You look like a man without a home," she said, standing there smiling.  Her hair was neat.  She looked as if she had been prepping for my arrival all day.  I was glad to turn off my engine and leave the car.  She had some snack prepared for me in the kitchen, which was the heart of the house when it was built before the American revolution.  The furniture was all Shaker.  When daybreak came the next day, I saw the militia certificate on the wall for the man who built the house.  It certified that he fought the British.

There was a big field of wild blueberries in front of the house, and now and then a deer would poke across, taking its time to feel each blade of grass on its hooves.  There was indeed a pond nearby where the locals and vacationers came to swim and sunbathe.  When my son came to visit me, we went slipping out into the water like two bears, the only black people on the beach.  I took him mountain climbing on the smaller mountains nearby.  We made it halfway up one of them.  Beneath us we could see the plastic tubes connecting the trees and sending maple syrup down to the store by the road.

It was an idyllic summer, one that gave me a place to rest after being in Europe for two months and before going into Brown that fall.  It was my year of fellowships.  I had won my NEA earlier that year, and when Brown accepted me they gave me a full university fellowship.  I was riding high.  I had copies of my book Water Song in a box in my room upstairs where I listened to French radio from Montreal.

Catrina invited Jay and Lois Wright to come visit and I said I would cook and make tea.  True to my Baltimorean form I made fried chicken wings and served a generic tea from the store.  Catrina looked on in amusement.  I did my best, and I was absolutely stunned by Jay's presence.  Charles Rowell had described him as the most learned of all American poets of any race, and I do believe he was right.  He made such an impression on me that I have always striven to "know" as well as to "write."  Jay and Lois were kind enough not to speak disparagingly about my fried chicken wings. 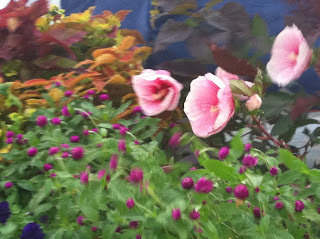 Catrina picked her times to give me instruction and comeuppance.  I was at the kitchen table putting together a scrap book of photos and favorite things from my trip to Europe as she stood by in one of her humorless moods.  After a few seconds she could not contain herself.

"When you have been to Europe as many times as I have you won't need a scrapbook!  I went to Europe on a steamer after I finished my degree at Radcliffe.  There were no transatlantic flights.  As for tea, had you read your Victorian fiction you would know the proper time for tea."

Well, that did not help my general lack of interest in Victorian fiction.  I made myself read Wuthering Heights and Pride and Prejudice, but Trollope was no match for Melville.  I chewed whole chunks of Moby Dick and loved teaching Billy Budd years later at Rutgers, but in this summer in the mountains of New Hampshire Catrina had near bout killed my desire to read fiction by the later 19th c. British scribblers.  They can all thank her.  Her spirit persists, despite the fact that it has flown.  She and her sister Betty lived past 100 years of age and carried whole histories with them.  Their father was the first accounting professor at Harvard, a man who thought DuBois was a rabble rouser.

The summer was about class distinctions and the mountains of things I had to learn as well as about the White Mountains that people the area like resolute saints.  I can see my son sitting with me now near the top of that smaller mountain, looking down and around at creation.  Time was suspended for us.  Troubles and doubts were at bay.  I had managed to tear off a chunk of freedom from life in a place where the night sky seemed nearly white with stars and I could see the infrequent traffic lights of cars peeking around the highways of distant mountains at night while animals I could not see made music I did not know in trees waiting for me to name them.  I call them memories.  I call them the gateways to the next phase of life, the sentinels that watched me as I slept those nights in New Hampshire.

As for falling in love, I was in love with a woman whom I would later marry, Ms Aissatou, but that summer I fell headlong into a loving friendship with Catrina, a woman fifty years my senior who loved sipping her brandy while watching Tom Brokaw and picking at me as I cut the lawn or trimmed the lilacs in front of the door.  I think of Catrina and the lilacs in this line from Walt Whitman's "When Lilacs Last in the Dooryard Bloom'd" as what is love if it is not sometimes careless and inexplicable?

"You only I hear—yet the star holds me, (but will soon depart, )
Yet the lilac with mastering odor holds me."

It was what Charles Rowell thought I needed, that summer with Catrina, who knew so much about me the minute she saw me.  About that much, he was certainly right, right about the right turn from the mailbox onto that steep hill leading up to parts of me that I had yet to "know" and to "write."