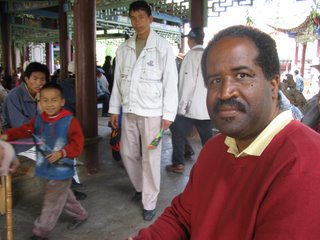 My friend the poet Yu Jian took this photo of me in an old park there in Kunming, his home, a lovely city in southwestern China. After work people come to the park to play music and sing, to play games, to sit and chat. We spoke in Mandarin, the Chinese that links together a country of many cultures and languages, so there was no way for me to escape. It is the best situation for a student of the language. The park is quite old, and Yu Jian expalined to me that he played there as a child.

"Come back here, Yu Jian," his mama would say when he ran off away from his parents. He and I are the same age, give or take two years with me as the older poet, but in Kunming Yu Jian is called "Lao Shi," which means "Teacher," a title of respect.

It was a warm day in spring of 2005 when I went to Kunming after a trip to Hai Nan where I visited the poet Wang Xiaoni and her husband the critic Xu Jing Ya, both of whom teach at Hai Nan University. Hai Nan is rather hot, but it was a bit cooler in Kun Ming, where the downtown area is full of gigantic department stores. Yu Jian told me I should go to the park alone in the morning and do my exercises. So I did.

Leaving my hotel the morning of the next day, I found the park and did my Taijiquan (Tai Chi Chuan) for just a little while before turning to leave. I was mostly ignored but a few folk took notice of the fact that this somewhat large black man was doing Taiji in the park. I turned to leave and found my way to a group of trees planted in a small plaza, which I thought was the way to the exit gate. It was not, and I tried two other paths, both of which left me still in the park. A man does not like to admit he is lost, as most women will quickly say. But I was lost, and I thought of the number of gates, four I believe is what Yu Jian told me. The number four in Chinese sounds like the word "to die," and I was near bout sick enough with male embarassment to feel like I was dying of the same. But before long I found an exit. It was near the shops where Yu Jian and I looked over some things the day before.

That evening I started drafting a poem in Chinese, using my dictionary and writing by hand. It is a slow process for someone with just three years of language study, which is what I had at the time. In Chinese you learn the order in which to write the strokes, and the names of the strokes. Each stroke has a name. The characters have parts that are written in proportion to one another. All this is supremely important when you begin to study calligraphy. I wrote slowly, and when I showed the poem to Yu Jian he liked it. I felt like I was showing my homework to the Teacher. Indeed I was. Traveling is best, I think, when you want to show your homework to your teacher. For me it seems life has much to teach me that way. 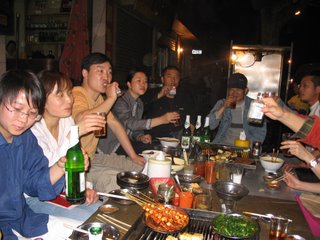 Before I left we had a poetry reading at a nightspot called The Speakeasy, a place in the downtown area. A young and rising female pop singer from Shanghai came down to sing, and others read translations of my work after I read in English. Afterwards we went to this sidewalk barbecue you can see in this photo above. Everyone around the table was an artist--poets, fiction writers, singers, and more. Many of them are the younger generation. Yu Jian told me to sit in this higher chair for my back support. He would not take "No," for an answer when I tried to sit on the same stool he sat on next to me. I had told him Wang Xiaoni took care of me in a motherly way in Hai Nan. For that he had a teacher's answer.
Speaking in Chinese he said, "Wang Xiaoni is your mother, and here I am your father. Sit in this chair."
"Okay, Teacher."
I was born in the year of the Rabbit. Yu Jian is a Horse. Any rabbbit with good sense will listen to the horse, who is much bigger.
In the poem I wrote about being lost in the park, and I summoned my deceased parents, questioning them about their power to keep me from losing my way in life, and as a teacher of young poets I constantly question my ability to keep them from being lost. Now I am realizing I can only teach them cartography, which is to know the meaning of maps and of worlds.